In the battle between preservation and development, Esley Hamilton (1963), who works for the St. Louis County Parks Department, is the ultimate bureaucratic wheel-greaser for preservationists. 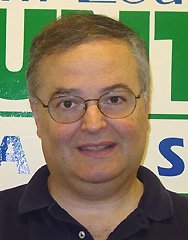 By Florence Shinkle of the Post-Dispatch

Esley Hamilton, the preservation historian for St. Louis County, wore his over-big glasses and tweed jacket to a recent meeting between local preservationists and officials from the Missouri Department of Transportation.

The mild-mannered Clark Kent outfit and job title disguises Hamilton’s power. He has been known to change the course of highways – bending steel, if you will – by the force of his historical documentation.

Participants met that day to discuss which houses in the impending path of rebuilt U.S. Highway 40 (Interstate 64) were eligible for the National Register of Historic Places. Making the list does not assure that a building will be spared, but it helps.

At risk were three homes on Bennett Avenue, a street of unpretentious ranch houses on the north side of Highway 40 near Laclede Station Road. The neighborhood had already been rejected by the state preservation offices as insufficiently historic to qualify for the register.

Esley to the rescue. Hamilton’s students in a landscape architecture class he was teaching at Washington University traced every title of every property on Bennett Avenue, uncovering a dramatic story of African-American settlement in the county. Hamilton presented his facts straightforwardly, letting them speak for themselves.

He said that in the years after Shelley vs. Kramer (the Supreme Court case that resulted in open housing) when African-Americans were able to move into St. Louis County, they mostly moved into existing homes. But a new development of mostly brick ranch houses was planned for Bennett with the prospect that blacks would be moving in.

The city of Richmond Heights did everything possible to keep the homes from being built, including attempting to pass a bond issue to purchase the area for a park. So while the homes aren’t very old – just 50 years or so – they are part of civil rights history, Hamilton said.

The panel of Transportation Department archaeologists and engineers all nodded gravely, acknowledging the merit of the account. They had heard it before, in newspaper stories that Hamilton alerted reporters to. Someone announced that the department designers had been able to “tweak the design” for the new road.

Lesley Hoffarth, project manager for the new highway, stood up, declaring, “I did the tweaking; I’ll show where we tweaked.”

Net result: Three old homes will remain standing, for whatever future blessing they may bestow.

Threshold to the past

Old houses make you want to know who lived there. Lose the house, you lose the frame for contemplation of the past. You lose the physical threshold to another dimension.

In 1977, Esley Hamilton became a consultant to the commission, and in 1980, he accepted a salaried position within the Parks Department as the county historian and preservationist.

Immediately, the commission authorized him to do an area-by-area in-depth inventory of the county’s treasures. And who would have known there were so many?

Hamilton excavated historical foundations that no one had been aware existed. He provided provenances and the glitter of heritage to more than 200 properties, many of which would have been dismissed – including an outhouse on Henry Avenue in Manchester which recently was accepted to the National Register as part of the Henry Avenue Historic District.

And he gave preservationists a crucial weapon – facts to replace spotty memories and vague intuitions of a building’s worth.

Largely completed by 1988, the county’s inventory of historic buildings now is quoted like Scriptures by preservationists, as is Hamilton himself. “Esley said” shores up a building’s historical merit the same way that a beam shores up the building itself.

In a public hearing to consider razing a historic structure, “Esley said” resounds like the opening shot in a war.
And if Esley doesn’t say, the outlook for a building is grim.

“I wanted to save my father’s house,” University City resident Kay Drey recalled. “I called Esley for an evaluation. Esley said it wasn’t historical; it was just old, so they tore it down.”

In the battles to readjust the balance between preservation and development, Hamilton is the ultimate bureaucratic wheel-greaser for the preservationists: the advance man, the go-between, the behind-the-scenes man who won’t give up the seemingly lost cause.

Hamilton worked for eight years to save Hazelwood’s Utz Tesson house, built in 1782. It sat marooned on Utz Road in the middle of Tesson Park Estates. Developer Charles Karam wanted to build on the lots where the house sat. What really worried him was that he couldn’t get liability insurance on the empty building, so it sat there like an accident waiting to happen.

Hamilton circulated fliers seeking a buyer at preservation conventions. He ran ads in national publications. He put the building at the top of a list he drew up of the county’s most endangered sites. Then he made sure the list got to the newspapers.

The years of consciousness-raising by him and Hazelwood’s small band of preservationists paid off. Karam had agreed to give the city the house if only someone would get it off his land. Three weeks ago, Mills Corp., developers of a mall in Hazelwood, put up $50,000 to move the old house to safety in Hazelwood’s Brookes Park as a goodwill gesture to the city.

Hamilton prizes accuracy, of course. He writes helpful letters to the editor to set the record straight on matters such as the proper pronunciation of Fauquier Avenue (Fawkeer, the anglicanized version, is correct because the name is descended from Francis Fauquier, who was an English-born colonial governor of Virginia, unenamoured with things French.)

Hamilton also has written letters on the danger of cleaning statues by power-spraying them and on the number of times the United States has had six presidents alive at once.

The letter writing is done in between his teaching of landscape architecture at Washington University, his leading of tours of historic sites for the Missouri Historical Society, his singing tenor in his church choir, his book writing (he’s working on a book about postwar county subdivisions) and his endless meetings in behalf of preservation.

Last Christmas season, he had on his schedule six Christmas parties with various preservation societies. He has never owned a television; he regards it as a time waster. He has never had a wife, one suspects for the same reason. He lives in University City.

Intimate as he is with the city, Hamilton regards himself as “an outsider.”

“I’m getting to know a lot of people, for being an outsider,” he commented once approvingly. “In fact, people are asking me to sit on boards now. But you’re supposed to have money if you sit on a board, and I don’t have any money.”

Hamilton, 58, was born in Pennsylvania, the only child of a second-grade school teacher and an estimator for an airplane manufacturer. They surrounded the little boy with erudition. Ada, his mother, who was 42 when he was born, died two years ago. He and his father, Joseph, who now lives in a retirement center in Washington, D.C., communicate every Saturday morning, punctually at 8:30.

Esley Hamilton arrived in the St. Louis area in 1969. He worked in East St. Louis for six years as a planner for Model Cities, the federally funded program to resuscitate America’s downtowns.

Jamie Cannon, who was director of planning in East St. Louis at the time, recalls that Hamilton’s digs were in a rooming house at the corner of Missouri Avenue and 15th Street, an area so dangerous that whenever Cannon gave Esley a lift home, “I just slowed down enough so he could get to the curb; I never stopped completely. But Esley himself walked everywhere unscathed. Something about him made people look after him and feel protective
toward him.”

That purity of purpose that emanates from Hamilton strikes people as being at odds with his cultural sophistication and his savvy about getting a building nomination through the bureaucratic thickets. Trying to describe him, his admirers join contradictory adjectives: “knowledgeable” and “innocent,” “sophisticated” and “guileless.”

“He wants absolutely nothing for himself,” says Christy Love, who teamed up with Hamilton to keep development from overtaking the Charbonier bluffs in north St. Louis County.

“If you asked him what he wanted for Christmas, he’d probably tell you a stronger historic preservation ordinance.”

Normally, Hamilton has the zest for battle of someone who believes he’s in service to a great cause, but he gets downhearted over the proliferation of toothless preservation ordinances in municipalities around the county, ordinances that let the owner of a historic home choose whether he wants to participate in the city’s historic preservation program.

“It’s not the homeowners who volunteer to cooperate that are the problem; it’s the ones who don’t,” Hamilton snapped after the Chesterfield City Council passed just such a softie. He looked perplexed and disappointed. People who should know better were making it easier to squander something that seemed to him infinitely precious.

He said, “There’s always someone in every meeting who stands up and talks how a preservation ordinance is unfair because a city shouldn’t be able to tell a homeowner what to do with his property. Well, the city tells the homeowner when to cut his grass and whether he can have a fence or not and how to design his garage. What’s different about telling him he has a historic home and he can’t demolish it without a long enough delay to give people a chance to save it?”